Billionaire Thomas Peterffy admits he has invested in crypto

Despite failing to specify the precise type of digital assets, Thomas Peterffy said he had allocated some of his wealth into the crypto market.

Thomas Peterffy – Founder and Chairman of Interactive Brokers – revealed he had personally purchased some cryptocurrencies for himself. In addition, the billionaire stated that the clients of his company have been showing a growing demand for digital assets services.

‘You Have to Play The Odds’

During a CNBC interview, the Hungarian-born businessman Thomas Peterffy admitted that he has invested in cryptocurrencies. Despite saying that he is still skeptical over the long-term future of the asset class, he noted that there is a possibility it would become a globally dominant currency:

“Even I myself have put a little bit of money into crypto, because even though chances are, I think, that this is not going to be a viable market, I think that there’s a small chance that this will be a dominant currency, so you have to play the odds.”

Peterffy’s words came as a change of heart since he previously said that Bitcoin needs to stay away from the “real economy.” On the other hand, the billionaire, known as the “father of high-speed trading,” opined that cryptocurrencies are a great idea but only if the governments and officials allow their free trade and usage.

The top executive, who did not specify which virtual currency or currencies he owns, revealed that the customers of Interactive Brokers are more and more interested in the asset class, and the company plans to launch such trading options:

“Several of our clients expressed interest. And I completely understand it.” 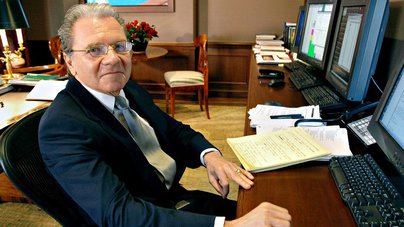 As CryptoPotato recently reported, one of the leading brokerage companies – Interactive Brokers – will indeed start offering cryptocurrency trading services to its clients by the end of this summer.

Thomas Peterffy asserted that the firm with more than three million trades per day must deliver maximum security for its clients while operating with virtual assets:

“As for hurdles, the greatest hurdle is how do you keep your customers 100% safe. How do you make it 100% sure that no one will steal their coins in spite of the fact that they are untraceable. We will find more about this when we open for business at the end of the summer.”